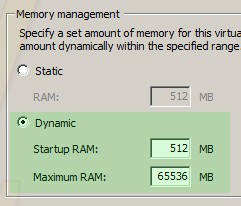 Looks like I was on to something a few weeks back when I showed how Microsoft had tried — but failed — to implement a feature that would allow Hyper-V R2 to accommodate the use of more virtual machine memory than available on the underlying physical host.

A screenshot of Dynamic Memory configuration in a post-RTM build of Windows Server 2008 R2 has surfaced in an article at Softpedia.

Listen… Do you hear that?

It’s the sound of Microsoft Virtualization curbing their criticism of memory overcommit.