The Truth About Hyper-V Memory Overcommit

The ability to assign more memory to virtual machines than physically available on a host is called memory overcommit and is a major factor that contributes to higher VM density — running more virtual machines per host increases efficiency and reduces cost.  VMware ESX has provided this feature for multiple generations, giving it an advantage over competing hypervisors.

The Cost Per Application Calculator makes it clear that investing in VMware vSphere 4 significantly reduces your datacenter hardware footprint and associated costs.  Scott Drummonds, the VMware performance expert, recently explained how memory overcommit is the only way to effectively use all of the physical RAM in a hypervisor.

Each time this topic comes up, Microsoft revs up their marketing machine and responds like this:

The truth is that Hyper-V will have memory overcommit the moment Microsoft figures it out.  If that day ever does come, watch the messaging quickly change to the familiar, “our customers asked us to implement this…” line.

Why is it fair to make such a bold claim?  Two words:

It’s a little known fact that some of the early releases of Hyper-V R2 actually had a feature that allowed administrators to assign more RAM to virtual machines than was physically present on the host — “Dynamic Memory” a.k.a. memory overcommit.

Microsoft also spoke to me about a dynamic memory capability (just like the balloon model that competitors offer). I asked why the company had been so vocal in downplaying competitive implementations of this technology yet was now implementing something similar and Ward Ralston explained to me that this is not the right solution for everyone but may help to handle memory usage spikes in a VDI environment. Since then, I’ve been advised that dynamic memory will not be in the beta release of Windows Server 2008 R2 and Microsoft is evaluating options for inclusion (or otherwise) at release candidate stage.

And this blog provided more detail on the implementation:

In Hyper-V 1.0, physical memory was hard allocated to the VMs, but in 2.0 the pool of memory is dynamically allocated and removed based VM usage with no service interruption. Dynamically allocating memory to VMs can drastically improve host consolidation rates.

Hyper-V 2.0 VMs are configured with an initial RAM setting (how much the machine boots with) as well as minimum and maximum RAM values. Hyper-V then adds RAM using the Hot-Add function, and removes it using a balloon driver (for supported OSes).

For the visual learners in the crowd, take a look at this VM configuration dialog: 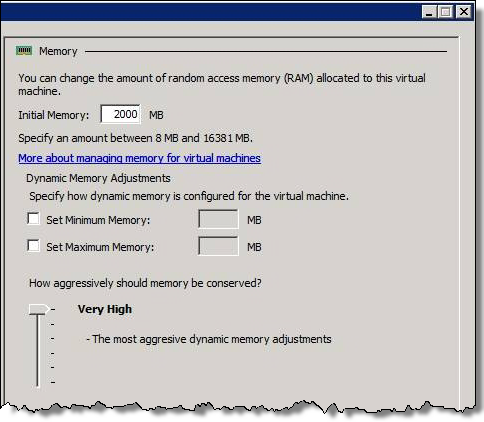 Note that this is nothing like Transparent Page Sharing in VMware ESX — Hyper-V VMs would actually be reconfigured using hot-add memory, so the guest operating systems must cooperate.

In an interview with Steven Bink, even Bob Muglia acknowledged the need for overcommit:

We talked about Vmware ESX and its features like shared memory between VMs, “we definitely need to put that in our product” later [Muglia] said it will be in the next release. Like hot add memory, disk and nic’s will be and Live migration of course, which didn’t make it in this release.

By the way, hot-add memory didn’t make it into Hyper-V R2, either — VMware ESX 4 has it today.

Evidently, dynamic memory was not even up to the rigorous “Quick” standard and was dropped from the release train.  Perhaps in some future edition of Hyper-V, Quick Memory Overcommit will be offered — with just a few seconds of VM downtime as RAM allocation is dynamically adjusted.  But that’s  just speculation.

Instead of finding a way to implement memory overcommit in Hyper-V R2, Microsoft has taken the alternate approach of attacking VMware and declaring the feature unnecessary, unsafe, or too expensive.

The fact is that memory overcommit is an extremely valuable capability and VMware ESX has had it all along.  Some of the Linux-based hypervisors are starting to figure it out.  Until Hyper-V finally adds the feature we’ll continue to hear how easy it is to simply buy more RAM.

How long can you afford to wait?