In a recent post on the Microsoft Virtualization Team Blog, Jeff Woolsey attempts to build a case for Microsoft Hyper-V adoption and reliability based on less-than-straightforward proclamations — explaining that there have been over 750,000 downloads of Hyper-V.  If he would have compared notes with David Greshler before writing the post he most likely would have claimed one million — that was the figure Greshler supplied at the recent Microsoft Management Summit:

There seems to be a problem with this highly-inflated claim;  the casual observer may even infer that over a million system administrators have downloaded and installed Hyper-V in order to run virtual machines.

Let me assure you that this is impossible, and here is why:

What’s that?  Hyper-V downloads occur whether or not a system is even being used as a hypervisor?

Yes!  Update 950050 is automatically downloaded to all Windows Server 2008 hosts — the standard Windows Update process.  Actually, the Hyper-V update is even downloaded to virtualized Windows systems (which are certainly not even capable of running Hyper-V): 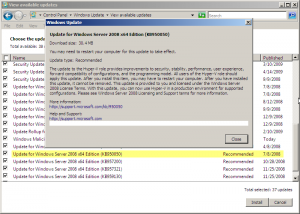 With that new understanding, you can decide for yourself whether or not it is honest to claim that there have been one million Hyper-V downloads, or if it is statistically significant to use that number to compute the reliability of Hyper-V (“.02%”).

While we are on the topic, at the Microsoft Management Summit David Greshler also reminded us of the IDC Virtualization Tracker stats, crediting Microsoft with 23% of the market — which is by units, not revenue.  Please refer to the slide at the top of this post.

It’s interesting to see the label “Momentum” and the “now has” statement, both of which imply progress.

Last year IDC released market share numbers that caused quite a stir.  You can read all about it from a VMware perspective at Mike D’s blog, but to quickly summarize: IDC stated that in Q2 2008 Microsoft had 23% market share (when Hyper-V had been actually shipping for less than a week).  Here we are — quarters later — Microsoft has increased their share to… 23%.  That’s some momentum.

I find it ironic that the whole point of the Microsoft blog post referenced above is to provide “facts” and dispel alleged VMware FUD.  It’s safe to say that this battle is far from over.