So far in this series on the OpSource Cloud, you’ve seen how to get started and how to manage workloads securely over the Internet.  Now let’s look at connectivity and performance between the cloud virtual machines.

If you are a vSphere administrator, it may come as a surprise to find out that some public clouds do not permit layer 2 connectivity between virtual machines.  Actually, you may be even more surprised to learn that it is very typical for your VMs to be instantiated on completely different subnets.  That means that all data must flow through another device on the network — an Ethernet bridge or IP router, filtering traffic — even if two virtual machines are on the same IP subnet.

The OpSource Cloud, just like vCloud Director clouds, offers true layer 2 connectivity.  If two of your VMs are on the same network, they communicate directly, not through an intermediary security bridge or router.  Here you see that the VM I am currently logged into has the MAC address of another VM to which it connects:

The above discussion on layer 2 connectivity may seem esoteric, but it ultimately manifests as very low latency between workloads running in the cloud — essential for multi-tier applications.  OpSource actually guarantees sub-millisecond response time, and in my experience they deliver: 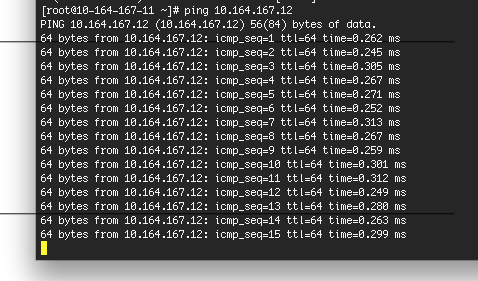 For a quick test of bandwidth between two VMs, I used iperf with default options and attained well over 900Mb/s — plenty for most applications that would be deployed in this type of public cloud scenario.

Because OpSource Cloud is built on top of vSphere, it works like a vSphere administrator would expect:  VMs are deployed on known subnets with layer 2 connectivity, offering the best potential performance while making it much easier to monitor and diagnose any network-related issues that could arise.