It’s a simple fact: VMware vSphere supports many more guest OSs — dozens more — than Hyper-V.  Microsoft defends their short list by claiming that they provide full support for the guest operating systems.  Sounds like a pretty convincing argument.  But is it true?

Microsoft is also quick to point out that they only support two Linux distributions because those are the only ones for which they can truly provide full support.  They are trained to work with specific versions of Red Hat and SLES and won’t bounce you around between vendors if there is a problem.  At least that’s the theory.

Many from the Microsoft Virtualization team, including Ben Armstrong, have articulated the policy in a number of venues, even right here on VCritical, explaining:

We will not bounce you between the two companies to try and find where the fault actually lies.

Linux on Hyper-V: Can we fix it?

I recently ran into a networking issue after cloning a SLES 11 VM on Hyper-V and thought it would be a good time to see what would happen if I opened a case with Microsoft Support for assistance.  Since the problem was not related to a production outage, I was categorized as “severity C” — they would call me back after A and B were taken care of.

The next day, a support engineer called me to troubleshoot and, in in the interest of speeding thing along, I agreed to let him log into my server remotely.

If only I would have noticed the disclaimer on their remote support tool: 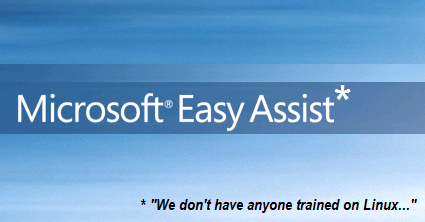 The Microsoft engineer checked a few things and determined that everything was working properly with Hyper-V but had no idea how to troubleshoot the Linux guest.  He put me on hold a few times to discuss the situation with his technical lead and management, finally asking if he could follow up the next day after doing more research.

Later that evening, I received a status update email with this clarification:

Scope Agreement: In this case we can provide our best effort support. we will work on Hyper-V and if there is nothing wrong with the Hyper-V settings and configuration we will consider the case resolved.

The next day, the engineer called me again and explained that they were not trained on Linux and could not troubleshoot the issue.  His manager joined via conference call and admitted that they can’t fix third party issues.  He apologized for the situation and emphasized that Microsoft would not charge me for the incident.

Sure enough, the next day I was notified via email that the case was closed:

Cause – Could not diagnose the issue as it was Third party server (LINUX).

Although the support engineer did poke around my Hyper-V host, he never once touched the guest — where the problem was.  Evidently, basic Linux troubleshooting is beyond the scope of Microsoft Support and crediting the charges for this incident is further proof that they are not up to the task of fully supporting non-Windows operating systems.

The Hyper-V guys were sure right about one thing: they won’t bounce customers around between vendors.

But seriously, all this talk about “fully supporting guest operating systems” is pure nonsense.  Your mileage may vary, but considering Microsoft Support spent several days collaborating on this case before giving up, I suspect it is far from an isolated incident.

Few enterprises have the luxury of standardizing on a tiny set of operating systems.  If your datacenter requires exceptional support for a wide range of environments — get VMware vSphere.

No Microsoft support engineers were harmed in the making of this article.

the fact that they wanted to close my case without charging me is further proof that
Follow @eric_gray Tweet
(Visited 441 times, 1 visits today)