Nice Windows VM you’ve got there…

It would be a real shame if something happened to it — something that required Microsoft Product Support.

Every so often, VMware hears from a customer that has just spoken to Microsoft Product Support and has been erroneously told that Microsoft software is not supported on VMware products.  That’s just about the last thing you — and your management — want to hear in the middle of a significant server virtualization project.

Fortunately, these problems usually go away as fast as they appear.  A quick visit to the Server Virtualization Validation Program (SVVP) website is enough to assure all parties involved that recent VMware ESX releases are absolutely a supported virtualization solution for your Microsoft workloads.

This confusion is often initiated by a Microsoft KB article that states, in part:

Except as described in this article, Microsoft does not test or support Microsoft software running together with non-Microsoft hardware virtualization software.

At first glance, one may quickly draw the incorrect conclusion that VMware is not supported.  That’s unfortunate, and until more people — including everyone in Microsoft Product Support — know about the SVVP, this is likely to continue.

I was curious to know why Microsoft support would often not know about the SVVP and the official Microsoft stance on VMware ESX support, so I sent one of my spies to Redmond to dig a little deeper.  It turns out that the Hyper-V marketing team arranged for a special Outlook email filter to be added to every support mailbox: 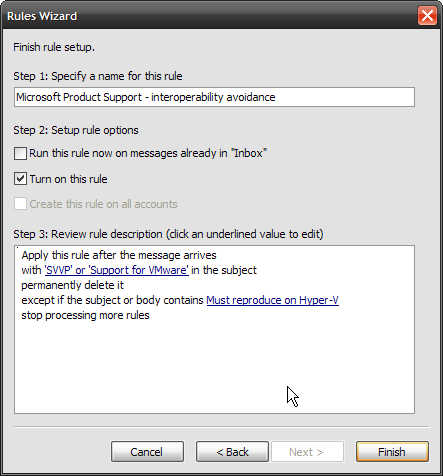 So there you have it — if Microsoft would just get the word out about SVVP, it would go a long way in satisfying the Microsoft/VMware customers in need of support.

By the way, Ryan Russell recently wrote about an experience he had when trying to get Microsoft to support an application on ESX, you might want to check it out.